With over 2 years since the release of their last album, this "As Daylight Dies" has been highly anticipated by their fans. 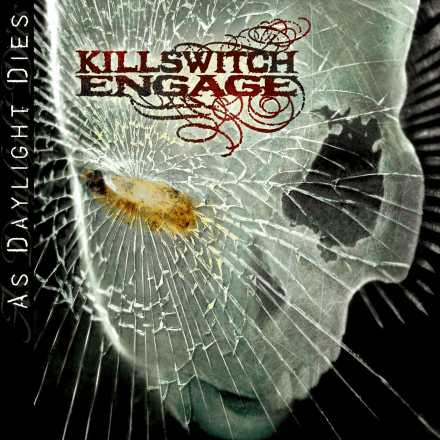 Killswitch Engage have been making a name for themselves since they launched their debut album in 2000, with their follow up albums ("Alive or Just Breathing" and "End of Heartache") only strengthening their name. Their 4th studio album, "As Daylight Dies" comes over 2 years since "End of Heartache" and is highly anticipated by their fans.

The opening track, "Daylight Dies", provides an atmospheric opening with the gradual guitar build up raising the anticipation. Howard Jones' distinct vocals fire up, initially quiet and clear, then the screaming arrives, any moment now the song is going to kick into life. Unfortunately though, the anticipation raises false hope as the expected furious guitar and drum combo does not arrive despite there being several moments when I found myself thinking 'ok, here it comes this time...'. The second song, "This Is Absolution", fires up with the sound I've been expecting, drums and guitars blazing. Although this makes me happy, I'm soon disappointed again as things slow down and the chorus is the only part that maintains the great guitar and drum combo.

It is clear that "As Daylight Dies" is not as heavy an album as their previous efforts and the overall pace feels somewhat slower as well. Not that this would make for a bad album, however there is something lacking from the album that has made me feel somewhat indifferent to it. It's difficult to decide what it is that the album doesnt have in any specific way. It could be that despite the change in pace from their previous work, it mostly sounds the same as what they have done before, particularly to "End Of Heartache", it feels like there not really anything new here. Another possibility is that throughout most of the album I feel fairly bored, only on a few songs is there enough variety, too often songs start to sound repetitive and I get the urge to skip to the next song - even after listening to this album around 20 times (these reviews have got to be fair!) it hasn't grown on me at all.

Of course, "As Daylight Dies" is not without it's good points. Vocalist Howard Jones continues to display great vocal talent, effortlessly moving from the melodic vocals to the coarse screaming and a few more styles in between. The closing track on the album, "Reject Yourself" stands out as my favourite and is one that will likely make its way onto a few of my play lists. "Eye Of The Storm" and "Still Beats Your Name" are also worthy of a mention, both capturing my interest as well as the sound that I associate with Killswith Engage.

It is unfortunate, I'd been hoping that this album would be good, I really liked "End Of Heartache", and despite sounding similar this just doesn't grab me in the same way. I can't help but feel that this has been a wasted opportunity, with some songs showing that the potential is there, however something has just gone wrong somewhere down the line and overall the album does not deliver, there is not enough that sounds new and most of what there is just does not draw me in.

Reviewer: Steviepunk
The verdict: 5 - Very disappointing, with more variety this could have been so much more