A Thrasing night out for all 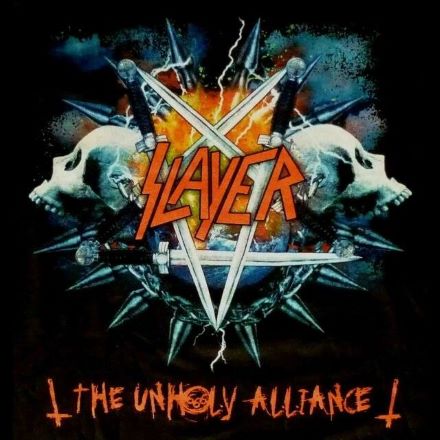 We were late arriving at the gig and missed Thine Eyes Bleed so unfotunately I can't comment on that band.

Children of Bodom were halfway through their set when we arrived but I have to say I was impresed with what I did see with some churning riffs and effective use of keyboards to supplement said riffs, their track 'Hate Me' particulary stood out.

Next up was Lamb of God and I would say that on the night they were second only to slayer. Again another band with excellent riffs and they sounded much beter live than compared to the studio tracks I've heard. They had a very drum heavy sound so heavy in fact the drummer broke a snare drum and the set stopped while it was replaced! The drummer was the star of the band as far as I was concerned but overall the standard of musicianship was of the highest order.

In Flames introduced themselves to the crowd with a row of LED lights at either side of the stage which initially were blue but then the intro music of the Knight Rider theme started and they turned into scanning Red LEDs as per KITT! Very cool!!

In fact this was the best part of their set as musically they did nothing for me and their songs all sounded a bit samey...

They seem over-hyped to me.

Slayer opened with Skeleton Christ and had a video backdrop displaying images relating to the songs some of which were a bit strong for my liking, they're taking this anti-religion stance a bit far!

All the songs from the new album they played such as the opening track, Jihad, Catalyst and Cult actually sounded great live, much better than the studio versions.

Another point I noticed was that there was an underlying War theme to the set with tracks like War Ensemble, Expendable Youth and Chemical Warfare being played alongside the above war related titles.

Surprises of the night were the inclusion of Die by the Sword and Seasons in the Abyss, the other surprise was the exclusion of any tracks from the last two slayer albums!

The rest of the set was like a greatest hits package (YKWIM) with old favourites such as Postmortem, Reign in Blood, Hell Awaits, Angel of Death, Dead Skin Mask and South of Heaven (which always sounds fantastic live even in the barn like acoustics of the SECC).

Dave Lombardo was on a high drum riser for all the crowd to see and his drumming was as exemplary as ever!

A great show let down by the acoustics of the SECC although I have to say it is probably the best sound I have heard in there.

Reviewer: El Tel
The verdict: 8 - An excellent show from excellent bands! (with one exception)