Death On The Road - DVD Review 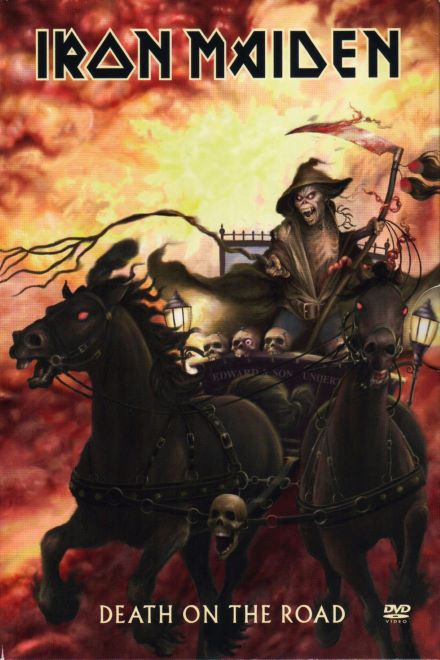 INTRO
About 55 minutes into the documentary on the extras disc for this new Iron Maiden DVD, manager Rod Smallwood sums up for me why people will buy this new release regardless of what reviews it gets. "The fans just love this band because this bands never let them down" he says, and he's absolutely spot on. When you buy anything that Iron Maiden lend their name to, you know you are getting quality and that the band have pulled out all the stops to make sure that you, the fan, get your monies worth. The Dance Of Death DVD hits shelves 6 months after the release of the accompanying CD - why the delay? - because Steve Harris wanted to make this a 3 disc release, making the 3rd disc another copy of the live concert recorded in stereo for those fans who have a DVD player but don't have the fancy big 5.1 surround sound system. This extra disc allows those fans (of whom there must be many) to get the absolute most out of their sound system. It's that kind of attention to detail (and the fact the package still comes at a standard price) that sets Maiden apart.

MAIN FEATURE
As you would expect, the live footage is of the highest quality. The visuals are stunning from the stage setup to the theatre of songs like Dance Of Death and Paschendale to the editing of the show which cuts between the 6 band members and crowd fittingly, constantly capturing an iconic moment or reaction. The opening fours songs are fantastic and must have left the Dortmund crowd breathless! It then moves into a section which promotes the newer material. Of the 16 tracks on the disc, 7 were released this millennium and the band make no apologies for playing newer material at the expense of some older classics, they see this as their way of remaining relevant today and not becoming a cabaret act. Personally, I think the newer material sounds far better live than it does on record and the likes of No More Lies hold their own sitting next to long time favourites such as Hallowed Be Thy Name, proving what a formidable band Iron Maiden are as a live act. The show is rounded off with an encore of Number Of The Beast - where Eddie makes his long awaited stage entrance and Run To The Hills - a fitting climax. Both are preceded however with a stunning acoustic version of Journeyman. It may be strange to see Janick Gers sitting down to strum on an acoustic guitar but it is a masterstroke and proves this band can still surprise you after 25 years. A show as good as this will appeal to so many people: those who already bought the CD will revel in the visuals and extras, those who don't know Maiden will find this an excellent introduction with a fantastic blend of old and new songs, and those like me, who were there to see the tour first hand - there's so much more you will see with this front row view than you did on the night!


EXTRAS
The main documentary clocks in at 75 mins and is extremely informative without ever becoming dull. It shows how new producer Kevin Shirley taught this old dog some new recording tricks and gives an insight into how some of the compositions came about - it's funny to see several members take the credit for the acoustic concept behind Journeyman! Unfortunately the rest of the extras aren't as worthwhile and are a bit dry. Do I really want to spend 30 minutes of my life listening to 'The Fans' (make that 'complete nobodies') talking about who their favourite band member is? No I don't, it's boring, I lasted 5 minutes then skipped on. 'Life On The Road' is also rather dull which is a shame because it's a great idea, basically for 45 minutes you get the story of all the backroom staff: the guitar techs, the sound engineers, the lighting managers etc. All people with interesting stories to tell, it's just poorly executed. The EPK feature contains interviews with the band, most of which were shown on the main documentary. The rather impressive promo videos for Wildest Dreams and Rainmaker plus some photo's round out the bonus disc.

Critics will point to the fact that Maiden have released 2 live DVD's to 2 studio albums in recent years but due to the presence of newer material and relevant extras I would argue that both are equally worthwhile purchases. I don't give out 10 out of 10's easily but I can't think of anything that could have made this package any better. Great set, great performance, first-rate sound and picture, excellent documentary and other disc filler...it's all here.
Reviewer: Marky Boy
The verdict: 10 - Nobody does it better. Britain's finest continue to fly the (Trooper) flag with gusto