System of a Down - Mezmerize Review

System of a Down are releasing two albums in 2005, Mezmerize is the first of the two. Do they have what it takes to maintain their high standards while working on two albums? 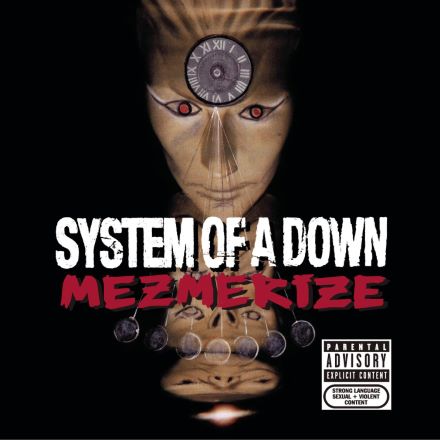 It's been a few years now since System of a Down released Steal This Album, an album that seemed strange with it's irreverent chorus lines and depth that some found difficult to penetrate and while good in it's own right it paled in comparison to the fantastic Toxicity album that it followed. It's now 3 years on and Mezmerize has arrived, the first part of a two album release. It's a risky strategy and many would fear that working on two albums will be a distraction that would see each album fall short of what it could have been.

On the first listen to Mezmerize, the opening is strong with 'Soldier Side - Intro' and the hard hitting 'B.Y.O.B.' (Bring Your Own Bombs), however as the album continues what catches my attention is the irreverent chorus lines, bringing back memories of Steal This Album and the thought that Mezmerize might not live up to the expectations that three years of waiting has generated. With lines like "My cck is much bigger than yours. My cck can walk right through the door", my initial thoughts were that SOAD had lost it, however I should have know better! Listen to the album a few more times and the real depth of it sinks in. System of a Down remain as political as ever, tackling issues from abuse of power and oppression to social apathy.

This album is powerful stuff, the songs are filled with energy, the chorus lines are insanely infectious and even the slower songs like 'Lost In Hollywood' are essential listening. In short, there is not a dull moment to be had, this album should be an essential purchase for everyone that likes metal. My personal favourites on Mezmerize are 'B.Y.O.B', 'Violent Pornography' and 'Revenga' - it was a tough call as this album is excellent, picking favourite isn't easy.

Now for the hardest part of this review, the Score. This is undoubtedly a fantastic album but will it have the sheer power to make it a defining album and take a full 10 points? To make a comparison, in the 90's Rage Against the Machine were probably the most significant political band of the decade with their self-titled launch album achieving legendary status, who doesnt know 'Killing In The Name'? That is what makes a 10/10 album. I'm going to have take the plunge and say that this album reaches these heights and should be an essential part of everyone's music collection, this IS a 10/10 album. If System of a Down can do the same with Hypnotise, due out later this year, they would have my vote for Band of the Decade.

Reviewer: Steviepunk
The verdict: 10 - An incredible album, if you don't have it yet, then get it now. It's as simple as that.