Review Type: New Release
Another release from the giants of punk music, Rancid. With a new drummer in the mix, does it maintain the high standard set by their previous work? 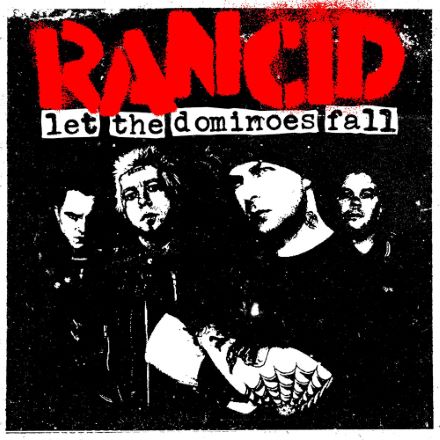 You can call me Mr Glass-is-half-empty. I'm a total pessimist. When a band I love announce a new album coming out I get excited for about 5 seconds and then it turns to dread. What if it sucks, then all my fond memories of this band will be soured. I can't help myself.

There aren't many bands I love more than Rancid. Every time I see them live I just think they're the greatest band in the world. I love the fact they're a bunch of mates up on that stage doing something they love, you can see the buzz they get from it and the music's awesome. I always leave their gigs thinking 'if I was in a band, I'd want it to be just like Rancid'. You can see how I have a lot at stake here. I was a bag of nerves as release day approached.

Album opener East Bay Night kicks things off nicely with a decent pace and shout along chorus and hot on its heels This Place is even more old school punk. But the strength of Rancid's seventh studio album is its diversity, all the bases are covered here from punk fury to ska to acoustic numbers. Other bands have tried this and released a mish-mash of confused drivel, however, with Rancid's ability to create a great song no matter what style and under the expert guidance of Brett Gurewitz there's no danger of that here and instead you get a thrilling roller coaster of a ride, constantly waiting to see what turn the record will take next. As well as great craftsmanship of songwriting the musical ability is there in abundance. New drummer Branden Steineckert slots in superbly and Matt Freeman's still got the best bass lines in the business.

The absolute highlights are: Up To No Good (it'll have you dancing in your seat), Skull City, New Orleans (classic Rancid) and the touching acoustic ballad Civilian Ways.

If I had one complaint it's that there's not enough Lars. One of the things I love most about Rancid is the interchanging vocal duties between Tim Armstrong and Lars Frederiksen and I think it was one of the great strengths of their career highlight And Out Come The Wolves. This feels more like Tim's album with little bits of input from Lars and Matt, it's a minor quibble however.

It's been a long 5 month wait but FINALLY, welcome to first essential album of 2009! Mr Glass-is-half-empty is wearing a massive grin.
Reviewer: Marky Boy
The verdict: 9 - Wonderful variety. Half the songs are instant Rancid classics, the other half would stand tall in anyone's collection. Outstanding.