After 9 years has it been worth the wait? 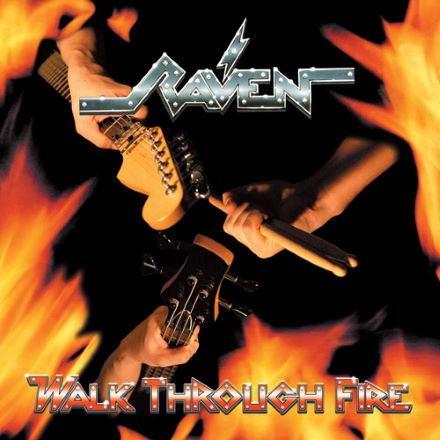 The reason this has been so long in the making has been due to misfortune and family tragedy.

The guitarist Mark Gallagher had a wall fall on him crushing his legs and it was feared he would never walk again but in true Rock n' Roll fashion he has bounced back with a vengeance!

There also has been family tragedy so every Raven fan like myself (unbiased me?) is glad to see them back!

The opening track is Raven back to the old roots fast and heavy with Raven's unique sound still intact!

It has to be said that John Gallagher's vocals have never sounded better, with the length of time he has been screaming his vocal chords should have been shredded but his voice sounds better than ever!

The album varies between heavy metal, thrash and speed metal with standout tracks as far as I'm concerned being "Under The Radar" (my personal favourite - Speed Metal), the title track "Walk Through Fire" (a good thrashy number) and "Armageddon" with it's typical Raven tempo changes and thrashier moments.

Another standout track and unusual for the album is Bulldozer with its groovy chugging riff.

There are a few tracks on the album that really creep up on you and after a few listens you find them running through your head afterwards, always a good sign!

I'm not sure about the Space Station # 5 cover but it's not a track I'm really familiar with to be honest.

The album was created as spontaneously as possible to capture the raw energy Raven create and this is how Raven sound best.

As expected from Raven the standard of musicianship is of the highest order with John playing a 12 string bass while bending the notes...

Mark has his usual frantic solos and his own unique sound to his axe...

As alluded to, with so many bands trying to copy each other Raven have always maintained their unique sound no matter what style they use whether it is Rock n' Roll or Thrash (areas they have ventured into). They should be applauded for that. Even with their more commercial albums (The Pack is Back - their Judas Priest -Turbo moment) you still knew it was Raven!

The album is only on release in Japan at the moment as they are still looking for a European Distributor but I hope they find one soon as this is a cracking album and anyone who likes good honest Heavy Metal will appreciate it!

For any Record Companies out there reading this, bring this album to Europe!!

Raven recently played a gig in Japan and Marty Friedman (ex-Megadeth guitarist) came up on stage to play along on three tracks. Marty has always named Raven as one of his influences and it was good to see Raven getting some recognition.

Reviewer: El Tel
The verdict: 8 - Raven are still on top of their game and it's about time someone noticed!