10 years since their first album was released (give or take a week), Static-X bring us 'Cult Of Static', their 6th studio album. 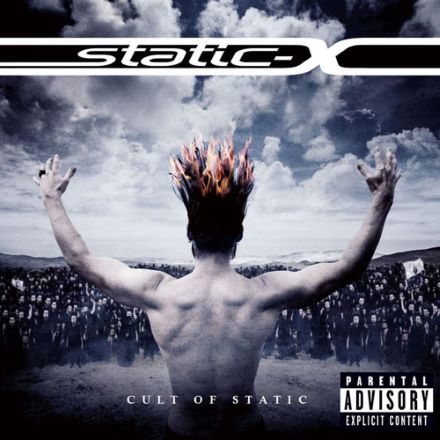 As fan of Static-Xs previous albums, particularly Machine and Wisconsin Death Trip, I've been looking forward to the release of Cult Of Static for a while. I've always been a fan of the synth and drum beats of Industrial Metal and as the scene was quietening down (outside Europe anyway), Static X were one of the few bands that had a significant presence while most new bands were following the Nu-Metal trend. It was the Machine album that caught my attention and I was instantly hooked.

Now, the first thing that I notice about Cult Of Static is that everything is just a bit slower than I was expecting. This isn't just on one song, this is a trend across the whole album, with the only real exceptions being 'Skinned', which carries a rapid synth beat behind the drums to help boost the overall tempo of the song, and 'You Am I' which does have faster drums and more energetic guitar work. Normally, metal bands slow their songs down when they want to add depth and make things 'heavier', and Cult of Static certainly is heavier than most of their previous work but unfortunately I don't think this is a move that has worked to their benefit.

The slower pace and more prominent bass drum beat gives many of the songs a very similar general sound, which through the course of the album does not vary a great deal - meaning that it can be quite easy to 'drift out' when listening to the album, particularly if the album is on when you are doing something else (like using the Internet or driving for example). Of course, it wouldn't be fair to say that everything sounds the same, 'Tera-Fied' stands out a distinctive song, starting with guitar only rhythm with female vocals on top for the first minute or so and reusing this at intervals through the song. It's a shame that more of the album doesn't provide anything else as distinctive.

As a whole, 'Cult Of Static' just doesn't live up to the standard we've come to expect of Static-X. The pace of the songs is too slow and is not compensated enough by the 'heavier' beat and although a few songs do stand out from the rest - the afore mentioned 'Tera-Fied' and 'Skinned' as well as the album opener 'Lunatic' - but do not stand out far enough for the album to reach the levels that 'Machine' and 'Wisconsin Death Trip' reached.

Reviewer: Steviepunk
The verdict: 6 - Not terrible, but very disappointing.