Review Type: Gig
Machine Head, Trivium, Dragonforce, Arch Enemy, Shadows Fall. I can't see any reason why any metal fan would not want to be there! 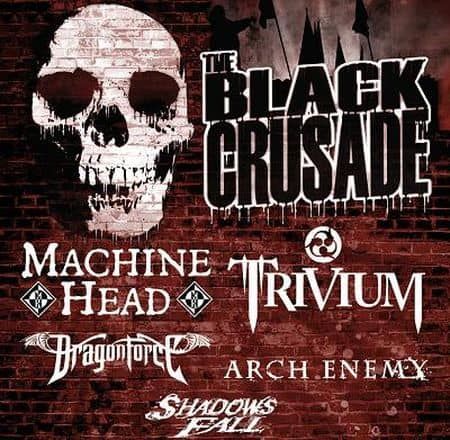 The Black Crusade tour kicked off in Glasgow on the 20th November 2007, with a very impressive line up. This gig has been highly anticipated by the team!

Although we were a bit late and missed Shadow Fall, friends have said they were good. We were in time for the Arch Enemy set, with the ferocious vocals of Angela Gossow ripping out, at complete contrast to her feminine sounding 'normal' voice. They played an excellent set and (for us) kicked of the night brilliantly.

The 80's guitar-fest that is Dragonforce were on next, throwing riffs around like they were born for it. I love this band, and despite the initially poor sound quality (always a problem at the SECC) their set was amazing. During their 40 minute set they must have got through 5 songs (and an entertaining intro..), proving that there is nothing wrong with every song being a 7 minute guitar epic! One of these days I'll be able to catch them on their own headline tour, however I'm more than happy with my first time seeing them live.

For the third time in the space of year, Trivium stood before us. In my opinion, one of the best new bands of the last 4 or 5 years and fantastic live as well. Tonight was no different, squeezing masses of energy into their limited 50 minute set, never dropping the pace. We were also treated to the first live UK performance of a few songs - according to them anyway, I'm sure I'd heard their new single live before, or maybe I've just listened to the album too often! Excellent performance, further cementing my opinion that these guys are destined for big things!

Finally, the head liners of the night, the phenomenal Machine Head! With their own tour in the UK only a short time ago, there was plenty of excitement about another Glasgow show. Although the set time available was limited, Machine Head certainly made the most of it, with a great mix of old an new (mostly from Through The Ashes Of Empires, The Blackening and Burn My Eyes). The crowd were loving every minute of it, so much so that (once again) the crowd took advantage of a small gap between songs to start a chorus of Flower of Scotland (Scotland's national anthem) - as we said in our last Machine Head review, this is something that was prevalent during the 90s but hasn't happened too often since, Machine Head seem to be one of the few bands that still get the honour! The volume was amazing, even in the barn like environment of the SECC (yes, this is still the crowd singing!), so much so that Robb and the band just had to wait until we were done and once again he seemed to be left speechless - I think he likes coming to Scotland as much as we like having him here!

Once things got back underway, the place was one again rocking hard as Machine Head showed everyone why they are metal legends, with sounds ranging from the fast and ferocious to the slow(er), deep and heavy, all with amazing power. When it was time for it all to end, they went out in style with Davidian, sending the crowd into a frenzy and producing a monster of a mosh pit - the thing must have stretched to 80% of the depth of the venue (yes, bigger than the last one!)

All in all, a fantastic night. There were some sound issues that caused some problems through the night - Dragonforce seemed to lose sound completely halfway through their set - however the overall event was amazing. In my mind this easily eclipsed last years excellent Unholy Alliance tour

Reviewer: Steviepunk
The verdict: 9 - thoroughly amazing show, doubt I would tire of seeing any of these bands!