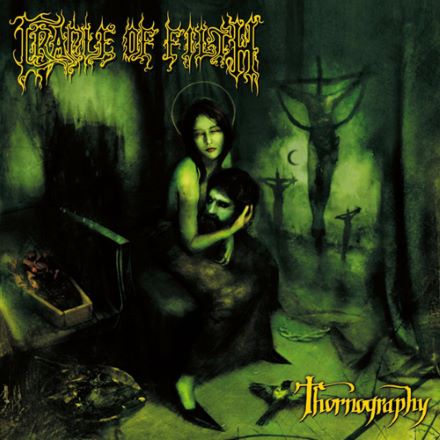 Cradle of Filth have been around since 1994 and have gradually progressed from a Black metal band to something of greater dimensions and depth. Their last album Nyphetamine was very orchestral based and had a lot of depth while still showing Black Metal roots. For this new album COF have ditched the orchestral passages for the most part and gone back to a more metal oriented standpoint.

On first listen I was not sure if this was going to work and there was also the fact that most what was on offer was not as fast and furious as compared to previous offerings.

On further listens though I have to say I love this album. Danni Filth has actually refined his vocal style so that he actually seems to sing on tracks such as "The Foetus Of A New Day Kicking" or "Tonight In Flames. This alone makes it a much more accessible album but before they are being accused of selling out I have to say this album is full of excellent heavy riffs as emplified by tracks such as the aforementioned "The Foetus Of A New Day Kicking" and "Lovesick for Mina" which has more time changes that a Mensa Member could keep up with!

Sarah Jezebel Deva, again is back contributing her stunning backing vocals to the track "Under Huntress Moon" and this track and the track "Dirge Inferno" are ones to cater for the old COF fans with lots of Black Metal blastbeats.

The track "The Byonic Man" has guest vocals from Ville Vallo (H.I.M) and is a slower tempo song but is held up by it's great riff and I love the inclusion of a Cello in this song, something COF have occasionally experimented with.

The author is old enough to be a fan of Heaven 17 and to be frank this track hasn't been off my turntable to these ears it is the best cover COF have ever done (and I think I've heard them all). The lyrics of this track are ready-made to be filthed up!! What a cracking riff they came up with for this cover!

Reviewer: El Tel
The verdict: 9 - Not a duff track on the album and killer riffs