It's been a long time since we've had an album from Body Count but finally Murder 4 Hire is with us. 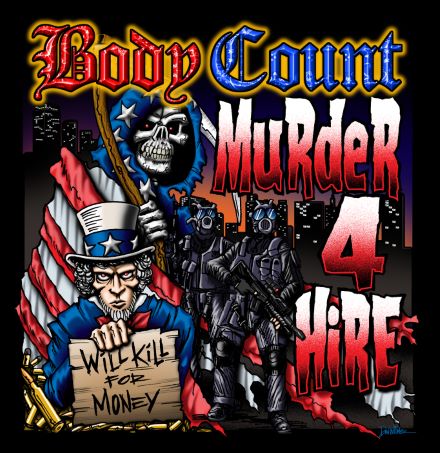 "BC Baby" sounds the opening lyrics, announcing Body Counts first album in 9 years. Finally making a comeback after the tragic deaths of their drummer Beatmaster V, guitarist D-Roc and Bassist Mooseman, Ice T and Ernie C are back with some new blood and Body Count are once again 'in the house'.

With the huge amount of time since Body Counts last album, it's hard not to have low expectations - after all, so many other great bands of the Nineties have failed to live up to expectations in the 2000s. I guess I should have had more faith in Ice T, as Body Count once again deliver the goods kicking straight into the bass filled and anthem-like 'Invincible Gangsta' (after all, you can't have an Ice T album without a song about Ganstas and Hoes!), a song that will stick in your head for some time with its infectious chorus line.

The pace of the album is varied, with each song having it's own distinct sound and tone. The album is easy to listen to, the varying pace throughout means you can just kick back and enjoy it for it's beats and guitar riffs, however pay attention to the lyrics and you'll find a wealth of issues being presented; ranging from Deep South stereotypes in 'Down In The Bayou' to the difficulties of relationships in 'Relationships'. Of course, as with every album since 2001 that wants to be topical, Body Count also cover the issues of the US government and the terrorism fears with songs like 'The End Game' and 'Dirty Bombs' though unlike other topical albums, Murder 4 Hire doesn't over emphasise these issues. It wouldn't be in Body Counts nature to pass up the opportunity to raise issue with corruption and abuse of power, topics they have covered many times before, only in this case the scale is much bigger than a single police department - I'd guess that these are issues that couldn't be overlooked, even if they are limited to just a few songs.

Since I got a hold of Murder 4 Hire, I've listened to it from start to finish more times than I can remember and yet I've not grown tired of hearing it. There are no real low points in the album, the standard is consistent throughout. The stand out tracks for me are the title track 'Murder 4 Hire' and the questioning of religion in 'The Passion Of Christ', with both of these capturing the furious style that originally launched Body Count with 'Cop Killer'.

One thing that will be obvious to every BC fan after their first listen, the album does not contain any of the between song 'scene setting' (who can forget "Today, 17 youths killed in gang homicide, and now Sports"?), not sure why this is the case as this had been a bit of a Body Count trademark - maybe they felt it was no longer necessary, or maybe it was a concession to the 'iPod Generation' to avoid clutter in the playlists.

Every Body Count fan should be checking out this album (many may have missed it given it's low profile release), not to mention anyone else that want's to hear the band that started the rap metal sound that has become common place in todays music (yes, Anthrax and Aerosmith could be credited for doing it first, however the rap metal that prevailed owes more to Body Count than to the 'party rap' used by these two). Fans will also be pleased to hear that Body Count have not lost their sense of humour.

Murder 4 Hire doesn't quite have the energy of BCs self titled debut album, however the new blood in the band (OT on drums, Vincent Price on bass and Bendrix on rhythm guitar) do help give a more up to date sound to the band. Now that Body Count have returned, we can only hope that we will not be left waiting so long for the next album.

Reviewer: Steviepunk
The verdict: 8 - Without a doubt, it's good to have Body Count back.