Punk legends Rancid are back again, 3 years since their last visit to Glasgow. The team are in attendance. 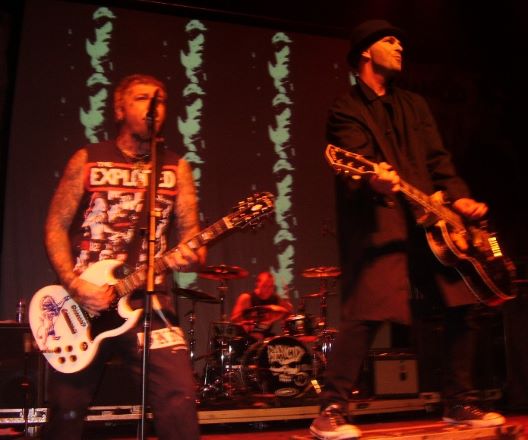 It's been 3 years since Rancid were last in this part of the world. Given the fact that they were utterly superb that night it's felt like 3 LONG years since they were here. Clearly I'm not alone in thinking that way since their gigs at both Glasgow and Edinburgh were sell outs despite the band not having any new material on offer since their last pair of sold out shows!

In 2003 I gazed up on the stage and looked in wonder at what I considered to be the perfect band. They were 4 mates, making great music, with a dedicated following, and who were still as close as ever. The departure of original drummer Brett Reed recently has slightly spoiled that myth, but seeing the camaraderie of Tim Armstrong, Lars Frederiksen and Matt Freeman on stage and listening to the tales of how a song was written or inspired, it's hard not to get lost in the feel-good factor again.

When the shows were announced some months back the band promised a greatest hits package which would also touch on the members other projects with the set list being tweaked each night so that no two shows would ever be the same. And true to their word they delivered the great and the even greater from their back catalogue with the majority of the material being pulled from arguably their best 2 albums: Let's Go and And Out Come The Wolves - opener, the classic Radio, going some way to set the stall out for the evening.

Other highlights included the always excellent Olympia WA, Maxwell Murder with a mind blowing bass solo, Salvation, Black & Blue and Bloodclot, while Time Bomb had the entire place ska dancing. As a special treat we got the old Operation Ivy classic Unity which is the first time it's been played in Scotland (well by 2 of the guys who recorded it anyway!).

The absolute stand out moment for me though was the encore: utterly stunning acoustic (yes I said acoustic) versions of Fall Back Down - which was belted out word for word by the crowd and Billy Bragg's To Have And To Have Not which Lars covered on his first solo album. And to round things off new drummer Branden Steineckert (who slotted in perfectly) rejoined the guys for an all-out bouncing version of Ruby Soho.

A new feature on this tour is a backdrop with video footage projected onto it, including, amongst other things, movie scenes from Bullitt and Jason & The Argonauts! - just when you think Rancid are the epitome of cool, they raise the bar even higher!

So 3 years on they are still my idea of the perfect band, the balance is just brilliant, each person brings something unique and special and vital to the group - there's no such thing as a main man in Rancid - they are a group and their genuine love for what they do and their fans makes its way from the stage to the floor and straight back up to them. What a great experience.

Reviewer: Marky Boy
The verdict: 9 - A truly great band playing great songs in a great setting to a great crowd.