Slayer are back with their first album in 5 years, let us see if they can improve on the poorly received God Hates Us All. Have they returned to their Thrash roots? 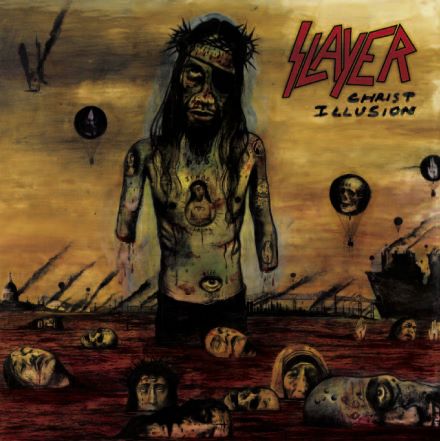 There has been a lot of hype about the new Slayer album claiming they have returned to their thrash roots. The return of Dave Lombardo was perceived by many (or gave hope) that this was the case. Many have derided the style the band have adopted for the last couple of albums which seemed to follow the dreaded Nu metal faction. Everyone has been hoping for a return to form with this album.

The opener 'Flesh Storm' is classic Slayer, very thrashy and reminiscent of 'War Ensemble', a good start. 'Catalyst' follows which is even thrashier and Dave Lombardo makes his presence noticeable on this track. 'Eyes of the Insane' slows things down with lyrics describing shellshock. 'Jihad' is written from the perspective of a Terrorist and starts pretty weakly but ends very strongly. The lyrical content of the songs is one problem I have with the album. Do we really want a 45-year-old man proclaiming "Hail Satan" and "666"? Lyrics like "Religion is rape, religion's obscene, religions a whore" are hardly intellectual! Most of the subjects covered in the tracks are religion and war but lyrically some of the tracks sound a bit basic although they are socially relevant. Jeff Hanneman and Kerry King have created some great riffs on this album especially in the tracks 'Cult', 'Consfearacy' and 'Black Serenade', which starts slow and ends up thrashing along. The problem is a lot of the riffs are lost in uninspiring guitar solos, you will start to headbang along to and then get lost in the solo. Tom Araya's vocals also sound tired at times.

Despite having all these criticisms this is the best Slayer album in years, certainly the best since 'Seasons In The Abyss', they have returned to their thrash roots at times while still including the slower style they have adopted of late but with better riffs. This album seems to be a crossover between the 'God Hates Us All' and 'Seasons in the Abyss' era and earlier style and on the whole it works but a lot of people will be disappointed it isn't the old classic Slayer, will they ever match 'Reign in Blood' again?

Reviewer: El Tel
The verdict: 7 - A near return to form, maybe next time?