Bullet For My Valentine - The Poison Review

'Saviours of Metal' is one of the labels being thrown around to describe Bullet for My Valentine and their first full album, 'The Poison'. A lot of responsibility to put on a new band, do they live up to the title? 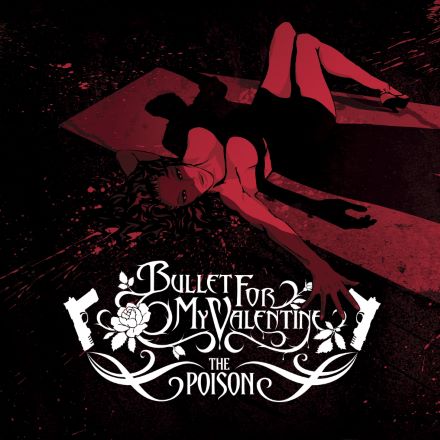 In recent months we've been hearing a lot about Bullet For My Valentine. A UK band, originating in Wales and following countrymen Funeral For A Friend and Lost Prophets to the big time. They released their debut album [b]The Poison[/b], which has been very successful and the UK press has added them to the list of bands that comprise the 'Saviours of Metal'.

Starting off with the suitably named [b]Intro[/b], The Poison get's started with a slow and deep introduction before launching into high speed action with [b]Her Voice Resides[/b]. From here, the pace rarely lets up, keep the high tempo and deep bass drum beats and mixing in the odd melodic sequence or two. That said, at times there is a feeling that there is not enough variety across the album, it seems that one melodic section sounds too similar to any other melodic section and at times the bass beat could suffer the same criticism. Not that this is an album destroying problem though, the mix of pacing within songs does well to prevent the similarities being repetitive, in particular songs like [b]Tears Don't Fall[/b] and the closing track [b]The End[/b] make good use of the varied styles. It does mean that if you like one song then you are bound to like them all

Altogether, [b]The Poison[/b] is a pretty solid album with no songs that stand out as being short of the standard set by the rest of the album, little sign of weakness. The stand out tracks for me are [b]Her Voice Resides[/b], [b]Spit You Out[/b] and [b]Room 409[/b], predominantly for their good pace and heavy beats (and great intro beat on [b]Room 409[/b]).

[b]The Poison[/b] is a good start from Bullet For My Valentine and hopefully an indication that they will be a band to watch over the coming years. I wasn't too taken by this album on my first listen but this definitely grows on you and after few times around on my CD changer I've come to really enjoy this album. While it could have used a bit more variety overall that doesn't really take away from the enjoyable album that it is. Recommended to all, particularly anyone wanting to see what British Metal can offer now.