Slayers ultimate record, reviewed as a reminder as to why they are the kings of thrash metal. 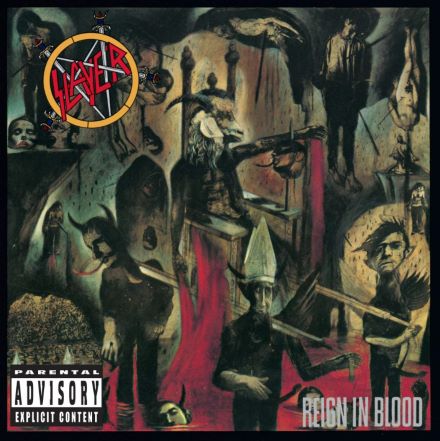 For anyone with an interest in thrash metal (or metal in general for that matter) there is little that's been said about this album that hasn't already been covered. Nevertheless the reissue of the original recording of 'reign in blood' more than warrants another glowing review of all the merits of one of the finest metal albums ever recorded.

Whilst perhaps not being the first band to delve into the most extreme side of metal (think Venom, Death etc.) Slayer put most speed metal acts to shame when they unleashed this monster in 1986. Def Jam released this dark masterpiece to great acclaim at the time, and to this day it is still regarded as an essential classic. From the opening buzz saw riff of the brutal 'Angel of Death', which depicts the horrific experiments of Dr. Joseph Mengeles in the nazi concentration camps right through to the thunder clap and cloud burst at the close of 'Raining Blood', this album doesn't let up for one second in the intensity stakes. The Duelling riffs and solos of Kerry King and Jeff Hanneman combined with the ballistic drumming of the undeniably immense Dave Lombardo will have you destroying your house in no time. Every single track pelts along at a terrific pace, with lyrics focusing chiefly on barbarism, cruelty and praise of the horned one. At times the lyrics are laugh out loud funny. For example, when vocalist/bass creature Tom Araya roars the legendary line 'enter to the realm of Satan' on the track 'Alter of Sacrifice' it becomes apparent that they may not be entirely serious about all this stuff, unlike the Deicides of this world. The latter bunch are certainly one of many bands who have tried with varying degrees of success to produce music as wicked and as brutal as this, because ultimately 'Reign in Blood' is the blueprint for any band playing in this style of music and it has never really been repeated. Some may point to Sepulturas 'Beneath the Remains' (amongst others), but for me that has just been the closest to Slayers tour de force.

So for youngsters just getting into metal and being turned onto bands such as Slipknot, it would be a travesty for them to miss out in 'Reign in Blood' because it stands the test of time and exposes numerous contemporary extreme bands for how utterly diabolical they are. Having said that, the Slayer of recent years is one that this reviewer hasn't been following the output of , since they have become a slower, more controlled machine on their last few efforts, and my last visit to their world was 1994s 'Divine Intervention'. An album which was released to the hype of being Slayers 'Reign in Blood 2'. A statement attached to the release of other albums of theirs since, all of which in my opinion have been false alarms.

So it is with great violence I urge anyone who doesn't own this album to buy it, burn it, borrow it, download it (or whatever the hell u do). I could go on about the lunacy of the track 'Piece by Piece' , the viciousness of 'Criminally Insane' or the brooding intensity of 'Post-mortem', but words alas, cannot do justice here I'm afraid, so all I can tell you is that you owe it to yourself to get this record.