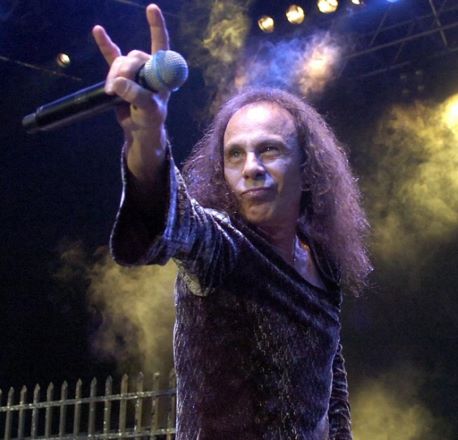 We turned up at this gig expecting to walk straight in only to see a queue running right down the street alongside the side of the building! The queue was huge but it showed that old school metal still rules! It was meant to start at 1930 but we didn't get in until well after this, apparently they were still doing 'sound checks' which had commenced at 0930 that morning! We eventually got in and waited and waited and waited, it didn't start until 2050!

Dio commenced to play material from his entire career with Rainbow tracks such as Man on the Silver Mountain and Gates of Babylon (the finest track of the night to these ears) and Black Sabbath tracks such as Sign of the Southern Cross and Heaven and Hell. This track was enhanced by Dio being illuminated by red light from underneath with superb crowd participation. He covered the entire Holy Diver album with the track Holy Diver itself being warmly welcomed by the crowd. Other classics such as the Last in Line and We Rock were played, as well as newer material.

They had a screen to do the Holy Diver intro but in true Spinal Tap fashion they couldn't get it to work!

The band looked as if they were having fun but there was just a bit too much self-congratulation going on.

The guitarist Doug Aldrich (on loan from Whitesnake to replace an injured Craig Goldy) played guitar solos that sounded just awful - what's the point of playing a million notes a second if it sounds as bad as this? He didn't seem to have a problem with the riffs though!

The band played 3 or 4 encores and they were having fun but there was just a bit too much self-congratulation going on... One of the encores was Rainbow in the Dark and this again went down well with good participation from the crowd.

The band were on for about 2 hours with Dio's voice sounding as good as it ever did and lasting the pace.

All in all a good gig but he really needs to get Craig Goldy back as soon as possible!, Even that old stalwart bassist Rudy Sarzo sounded good on the night!

The only really downside to the show was the lack of real theatrics, gone are the days of Dio fighting Denzil the Dragon onstage! :(

Reviewer: El Tel
The verdict: 7 - Delays and bad solos couldn't detract from a gig from a singer who can still rock!