Review Type: New Release
Legendary show finally gets the visual treatment after 10 years in the vaults 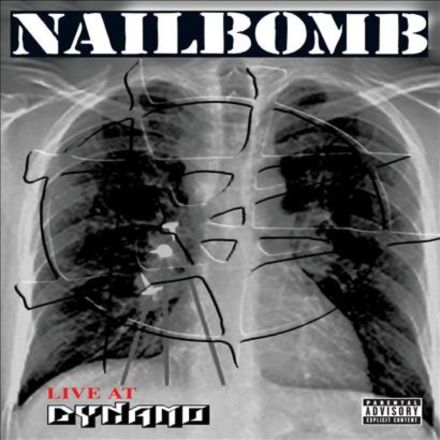 The Background
The Dynamo festival in Eindhoven, Holland 1995 was a legendary occasion. For one it was the largest crowd the festival ever pulled, 100,000 was the figure quoted at the time (it was scaled down the following year and ever since due to the enormous cost of the cleanup operation that followed) and secondly because it also featured the one and only live show from Nailbomb - the side project formed by then Sepultura mainman Max Cavalera and then Fudge Tunnel mainman Alex Newport - although technically they did play a rehearsal show in a club the night before. Highlights from the festival were broadcast that year on MTV but the arrival of a complete set list some 10 years later is a welcome surprise for fans.


The Main Feature
If you've ever met me or had a conversation with me in some form or another the chances are I've already bragged about the fact that I was at this show! That's the effect it had on me, it was one of the most memorable weekends of my life and I take great delight in telling people that I saw Nailbomb play live. The gig did of course get a release in audio form that year but as someone who spent most of the 40 minute set list head down in the pit, it's kinda nice seeing all these years later exactly what was happening on-stage!

On stage Max commands his usual formidable stage presence and looks every bit the metal hero he is, turning the screw ever so slightly with his newly died purple hair (wife Gloria can be seen standing at the side of the stage sporting green locks!). Alex on the other hand looks like the most unlikely metal riff monger you're likely to come across, but fortunately for guys like me, he proves it's the love of the music that counts - not the appearance. Both churn out 'keelar' riff after killer riff and scream their way through some of the angriest lyrics penned. They're joined on stage by bassist Dave Edwardson and uber-sampler Rhys Fulbar of Frontline Assembly and Fear Factory fame. 3 drummers take shots at tub-thumping duties, most notably D.H. Peligro appearing for a great cover version of the Dead Kennedy's Police Truck. There are a further two special slot bass players including Evan Seinfeld from Biohazard, who headlined the festival, (no-one rides a bass like that man!) and there's also the wonderful sight of Max and Igor Cavelera's kid step-brother Ritchie Bujnowski adding some guitar noise to Cockroaches - lucky little sod!

Of the set, we have 10 of the 13 'Point Blank' songs as well as the aforementioned cover. All eleven tracks sound as angry as they did on record and for a project which had quite a lot of samples on record sounds impressively recognisable. The finale of Blind And Lost and Sick Life being the highlight for me. Nailbomb themselves acknowledged in liner notes for the CD release that the set wasn't perfect, there were mistakes and technical difficulties - which you can tell by the between-song conversations, but don't let that put you off, they don't detract from the show, in fact, they further emphasise it's uniqueness and authenticity.


All in all, it's a visual treat seeing the energy poured out of the band and the shots of the massive crowd are breathtaking (and no, I haven't spotted myself yet). What's also interesting is number of people from other bands performing that weekend standing at the side of the stage, clearly also keen to take in this legendary occasion.


The Extras
Absolutely none. Yip, that's right, nothing. It's an absolute crime that given how unique the Nailbomb project was we don't get some interviews with Max and Alex and their collaborators 10 years on to reflect on their creation. We don't even get any discographies or photo's or any other disc filler. A real opportunity has been lost.

Reviewer: Marky Boy
The verdict: 7 - It may be mid-priced but when you buy a DVD these days you expect more than 40 minutes content. Saved by a legendary feature