System of a Down - Hypnotize Review

Following on from the release of the astounding Mezmerize album 6 months ago, System Of A Down round off 2005 with the second instalment of their double album opus. Expectations have never been higher. 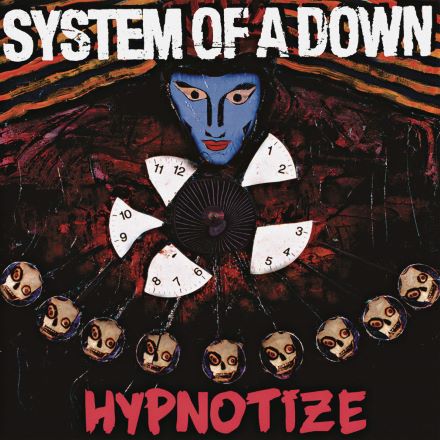 Six months ago we reviewed Mezmerize, the first of SOAD's 2 albums scheduled for release in 2005 and at the time Stevie said: "It's a risky strategy and many would fear that working on two albums will be a distraction that would see each album fall short of what it could have been." And after concluding that Mezmerize was an absolute triumph stated: "If System of a Down can do the same with Hypnotize, due out later this year, they would have my vote for Band of the Decade." Well my friends, the moment of truth has arrived.

Upon first listen to Hypnotize and indeed the first song Attack, which sets the tone for much of the album, it strikes me that this record is more of a System Of A Down album for the real old school System Of A Down fan than its companion. Confused? Let me explain. For me, Mezmerize was a different kettle of fish from anything SOAD had previously released. It struck me as a collection of more traditionally heavy metal structured set of songs compared to what they had unleashed in the past. Just compare the way the chorus' are delivered to anything on say Toxicity and you'll see what I mean, there's more actual singing and Daron Malakian hangs onto the guitar chords a bit more. New tracks like U-Fig and Vicinity Of Obscenity certainly have more in common with Jet Pilot than Revenga.

Now were this to be the case throughout the album you would have to credit the band with pulling off a master stroke: one album for the broader metal fan and one for the hardcore follower - who could possibly feel left out? But the more you listen to Hypnotize the more layers you will uncover, and that's what makes an album you'll still be talking about in years to come. Dreaming and (ironically) the stunning title track would feel right at home on Mezmerize and a few others serve up a more varied release than the one we were treated to in May.

It has to be said that as a whole, this is a more mid-paced record compared to the unrelenting assault that was Mezmerize and a stand out feature for me is the quality of the harmonies between Malakian and Tankian - metal fans haven't been treated to this sort of vocal delivery since Layne Staley and Jerry Cantrell were at their peak.

As a package, what SOAD have delivered this year is exceptional. We have two albums which fit together perfectly even down to the consistency of the artwork and the different versions of Soldier Side kicking off album 1 and closing album 2. Ive always been a fan of keeping albums short, sharp and to the point and with both records weighing in at less than 40 minutes they're lean and mean on their own or can easily be combined for those with the time to indulge.

To sum it all up, Hypnotize is just lacking a little bit of the class that was in such abundance on Mezermerize, but I would expect there will be others that disagree and I would imagine that like the Guns N' Roses Use Your Illusion albums, fans will have their own highlights and debate for eternity which of these two monsters is the best.

Reviewer: Marky Boy
The verdict: 8 - Personally it doesn't do as much for me as Mezmerize but whether Hypnotize is your cup of tea or not, one fact is assured, 2005 will be consigned to the history books as the year of System Of A Down, and that's all that matters.