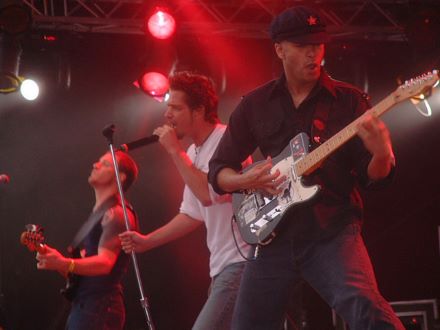 As someone unfamiliar with the band 'And You Will Know Us By The Trail Of The Dead' catch the attention with their unusual setup: two guitarists, bassist, keyboard player and 2 (yes two!) drummers. What's even more strange is that one of the guitarists and one of the drummers swap positions and whoever is on guitar duty also takes care of vocals. Bizarre! That's not to say it doesn't work. It's certainly different and keeps you watching but tonight's problem is that 'Trail just sound like a big wall of noise and it's hard to distinguish what lies below, as my mate Gary says "there's a tune in there somewhere". Regardless of what the masses think, the band have confidence in abundance which occasionally allows a bit of self-indulgence to creep into their music. There are certainly some interesting dynamics in the music which would suggest a studio album may be worth a listen, but this wasn't a great show.

Now call me a moaning git, but I get cheesed off when I pay £28 to see a band and I can't hear the vocalist for the first few songs. It just seems inexcusable to me when the same band have played the same venue the night before and know what they are dealing with. As a result opener 'Man Or Animal' suffers badly and there's little Chris Cornell can do about it, after all he's a singer not a shouter - it's up to his techs/roadies to do their part and get the mix right. Once it gets sorted out we're laughing because Audioslave put on one hell of a show! I read somewhere recently that they don't quite cut it live but based on what I witnessed tonight, that person doesn't know what they're talking about.

More material from the new album gets a very warm reception but if we're all being totally honest here it's the re-emergence of those Soundgarden and RATM classics that sends the crowd absolutely wild. Spoonman in particular gets an absolute pounding from those Rage boys. The classics keep rolling, the Academy keeps bouncing and the group look to be enjoying themselves, Tom Morello deserves special mention for the amount of energy he puts into the show - the man is fantastic, bouncing and twisting and spinning his body while sweat pours out from under his trademark baseball cap.

For encores we get a real treat, Chris Cornell comes out on his own armed with an acoustic guitar and gives us a beautiful rendition of the Soundgarden number 'Fell On Black Days' before being joined by the rest of the band for an equally moving version of 'I Am The Highway'. It's at this point that he seems to be at his most comfortable. Despite applying himself well to the roll of all-out frontman it's when he has a guitar strapped across him that he seems most at ease, but as he says himself, the rest of the band are so good that "they don't need me playing s***".

To round things off we get the totally rocking 'Show Me How To Live', a blistering rendition of the RATM classic 'Killing In The Name' and then 'Cochise', the pulverising track that marked Audioslave's entrance to the world stage 3 years ago. All in all a fantastic night with a superb set list which shouldn'y be a huge surprise when you look at the back catalogue these 4 guys have to choose from.

Reviewer: Marky Boy
The verdict: 9 - Excellent set and a performance to match. I'm being strict by robbing them of a perfect 10 by marking them down for the vocal sound and the omission of my personal favourite 'What You Are'