System of a Down - Glasgow, 15th June Review

Touring after the release of their incredible Mezmerize album, System of a Down hit Glasgow on the last night of their UK tour. 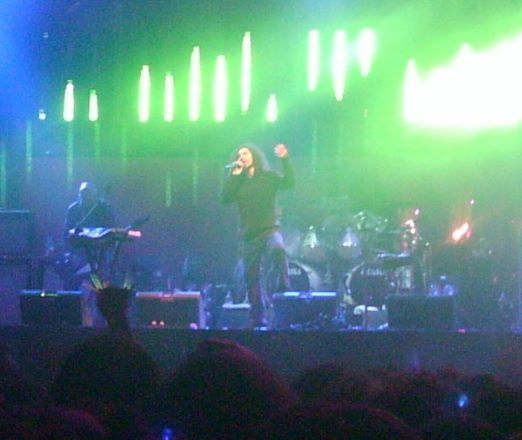 I've said it before and I'll say it again, the SECC is not the best concert venue in Glasgow. Sitting at the back of the hall in seat J7 doesn't help matters and sadly for them, support band 'The Eighties Matchbox B-Line Disasters' are not up to the task of filling this large hall with it's high ceiling. Don't get me wrong, they sound as if they have a few catchy glam-like sounds and some decent beats but supporting a band as formidable as System Of A Down requires someone a bit more metal and with more experience in this game (think how crazy someone like Napalm Death would have been on this bill!!). The crowd seem up for it at first but quickly lose interest and things are summed up by the first person in the standing area to get up on someone else's shoulders (he does so simply to raise his two middle fingers at the 'Disasters - you can't win 'em all)

A hero's welcome is what's in store for SOAD however, and you can't help but see the similarity to Slayer fans in how utterly devoted they are to their band and how incredibly up for it these Glaswegians are. The tension is further heightened by the band taking to the stage in fabulously theatrical fashion, a huge curtain with Mezmerize artwork covers the front of the stage and behind it we can make out the unmistakable silhouette of Daron Malakian and his guitar, as he serenades us through the 'Soldier Side' intro the crowd go absolutely wild in anticipation. The curtain drops, the rest of the band appear and launch into first single from the new album 'B.Y.O.B.' Sadly, if truth be known, the grand entrance and stunning song are let down badly by that awful SECC sound again, totally drowning out all the good work and the band look slightly frustrated too, it really is criminal when you consider that this is one of the best songs of the decade and we can barely hear the vocals. It's not much better as they launch into another devastating new song 'Revenga'.

Fortunately the sound gradually improves as the band keep turning the screw - 'Chop Suey' making a surprise early appearance. Indeed a great number of tracks from the Toxicity album are on display tonight, not surprising given the albums popularity but at times you begin to wonder which is the new album they are trying to promote! 'Deer Dance' is absolutely stomping while 'Aerials' slows the pace slightly (a bit of welcome relief in the stifling heat) but it still gets the same devoted reaction from the crowd.
For me though it's another slower moment that is the real jewel in the crown. 'Lost In Hollywood' sounds utterly fabulous and it's ironic for a band who've earned their reputation on mental shouts and sonic riffing that this is quite possibly the highlight of the show, it really showcases their talent and you cant help but think they've got it all in their armoury, if Hypnoztize follows suit then SOAD could be set to take over the metal throne which has been lying vacant for a few years now.

A couple of surprises on the night were that the band had next to no interaction with the crowd between songs, it's strictly business and one song after another, and there's little movement up on that stage. As well as that they don't do the traditional encore but given the fact they had just played 'Prison Song' (where the band finally looked a bit more animated), 'Toxicity' (which was great with thousands of Scots chanting "Disorder") and 'Sugar' in a row you would be a fool to expect one. The band walk off stage 1 hour and 35 minutes after taking to it safe in the knowledge that they've put in a solid shift and sent the masses home delirious.

Reviewer: Marky Boy
The verdict: 9 - A great gig by a band right on top of their game, it's a rare complaint but they could have got away with playing more new stuff tonight(where was 'Radio/Video'?). Only other complaint is that they were cheated out of the perfect 10 by criminal sound