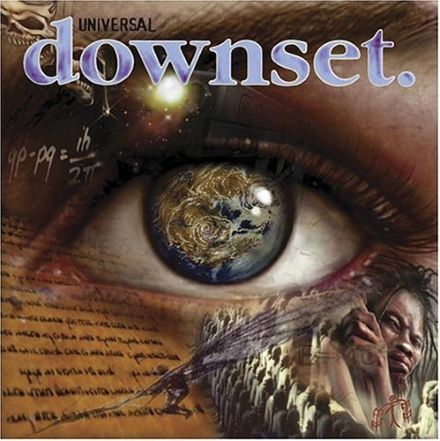 You'd be forgiven for thinking that Downset had given up this game a long time ago. 4 albums in 11 years is hardly prolific output is it? It wouldn't be so bad if you knew it would be worth the wait but if we're being honest their records have got progressively worse and the rap/metal genre is no longer as fresh as it was in 1994. So how does 'Universal' fair? Well sadly sports fans, I see little sign of that trend being reversed. It's a real pity because you can't underestimate the impact that Downset's debut album had, it had way more street cred than their contemporaries and rivals RATM, but everything that made that album exciting and catchy and pulverising is missing in 2005.

Now I might be wrong (after all what do I know about what goes on in the recording studio) but I just get the impression that the band had little interest or conviction themselves when writing and recording this uninspiring bunch of songs. In 39 minutes and 25 seconds we barely break out of 3rd gear and the long and short of it is that songs like 'Staying In The Game' and 'Jumping Off' just don't cut it for me.

It's not all bad news, at first listen opening tracks 'All Crews' and 'Forever' sound promising, but after listening to the rest of the album a few times they soon get dragged down with the rest. That said, they probably still stand as the best tracks on offer here and are undoubtedly the closest thing to "classic Downset" with there good paced riffing through the verses. Closing (and title) track 'Universal' also isn't so bad but you know you're onto plums when you scraping the bottom of the barrel with compliments like "isn't so bad".

All in all, it's a poor attempt at a return and it's hard to see them ever getting back to the top of there again now. Shame.

Reviewer: Marky Boy
The verdict: 6 - Not what we were looking for at all, again Downset fail to recreate former glories